An Arnold Schwarzenegger super fan has created a video in the hope of meeting his hero and it’s gone viral!

Gareth Bevan 39, wants to fulfil his dream of meeting action man Arnie as part of his 40th birthday celebrations.

He’s been saving to go to Los Angeles and is desperate to meet the movie star before the milestone next Summer.

The video, which has already been seen by almost 18,000 people, focuses on Gareth’s zest for life and his love for The Terminator star. It shows his room packed full of Arnie films and memorabilia.

The film was made by Gareth’s support carer Tilly May, who is a professional photographer.

Gareth is part of Tilly’s ‘family’ as he lives with and is supported by her Mum Chrissie and stepdad Marc Walpot in their Paignton home as part of the Shared Lives South West scheme.  The aim of the charity is to support people to be as independent as they can and to realise their wishes and dreams.

Gareth, who lives in South Devon, has been a fan for many years and got the chance to go to the premiere of one of Arnie’s films many years ago, but he wants to meet the star properly and has the backing of thousands who have watched and commented on the video on social media.

“Gareth has been part of our family for the last four years and we feel incredibly lucky to have him in our lives,” said Tilly.

“He makes everyone smile and is just such a joy to be around. He really is Arnold Schwarzenegger’s number one fan!

“He absolutely loves everything to do with Arnie and I just can’t think of a better 40th birthday gift than to make his dream come true.

“I think if Gareth met Arnie, he might burst with happiness. I also know that if Arnie were to meet him, he would without a doubt love Gareth as much as we do…. And he would be real hero to us all.” 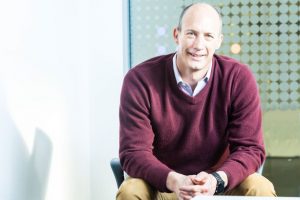 What Keeps me Awake at Night … Matthew Reed, Chief Executive at Marie Curie

What keeps me awake at night … Sam Monaghan, Methodist Homes